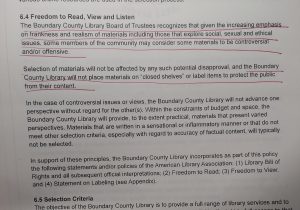 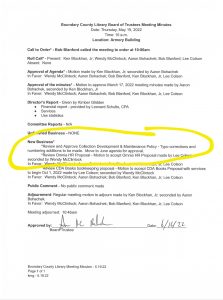 On June 16, 2022 the library board of trustees voted majority YES to update the Materials Selection and Collection Development Policy (section 6.4). They voted without public comments. While they do not have to legally the people demanded their voice to be heard, but was declined. Aaron Bohachek voted No (he is not named in the recall). Bob Blanford wasn’t present to vote, but this policy change has been worked on by the board for several months. In May, the board was working on typo errors. Bob Blanford was well aware of the policy change. If Bob was willing to take a stand and say NO to this loosely written policy change, Bob could have made sure to be present or call in for voting at the June 16 library board meeting. Furthermore, Bob could have argued the verbiage at the May meeting during the policy editing stage. Bob did not. Therefore we are recalling Ken Blockhan Jr., Wendy McClintock and Bob Blanchard (4 out of 5).
.
Link to policy: https://www.boundarycountylibrary.com/contact

Leave a reply Click here to cancel the reply

In a nutshell this podcast is about 95% correct with the recall story….